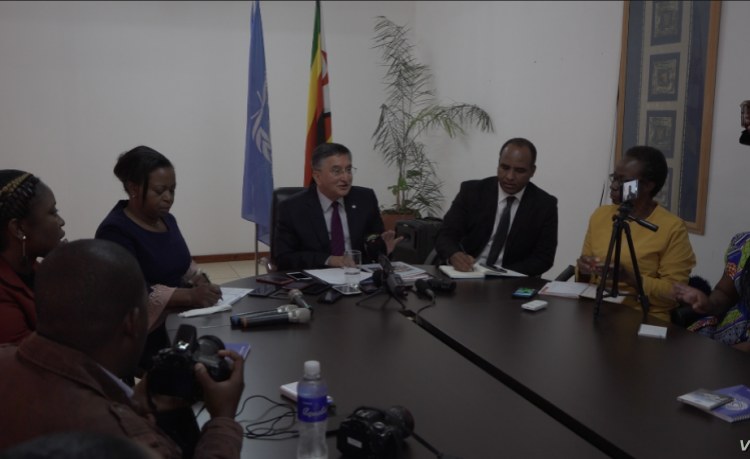 The U.N. envoy expressed concern about the situation, telling reporters that sanctions imposed by some Western countries are not directly responsible for Zimbabwe’s slow economy.

“The constitution provides space for people to participate in a peaceful means of demonstrations,” Parajuli told reporters during his last address in Harare. “I would say all means of peaceful demonstrations should not be threatened through violent means. And that can only add negative image on Zimbabwe, frankly.  Zimbabweans are very peaceful people, that is what I have seen, and tolerant people. And going to people in the evenings in masks and beating, that is absolutely intolerable. That should not be the right thing to do.”

President Emmerson Mnangagwa’s government has said it is investigating who is behind abductions, which have left many activists injured after taking part in recent anti-government demonstrations.

Tatenda Mombeyarara, the leader of the activist group Citizens Manifesto, is still recovering in a private hospital in Harare, after he was abducted by about 10 armed men. He still insists the people who abducted, injured, tortured and left him for dead are security forces.

Mombeyarara is one of the activists Harare accuses of attending a meeting in the Maldives earlier this year to plot against Mnangagwa’s government. He and several other activists are facing charges of treason.

Meanwhile, the outgoing U.N. boss in Zimbabwe urged Mnangagwa’s government to continue engaging the west as part of efforts to remove sanctions imposed on the country’s leadership in 2002 following reports of election rigging. Sanctions, he says, have little to do with Zimbabwe’s current economic problems.

“If you dissect the element of sanctions, some of the countries with restrictive measures are the largest supporters of Zimbabwe from a humanitarian development point of view. So they care (about) Zimbabwe,” he said. “Yes, the perception of sanctions can mislead certain interests in terms of potential but I have seen strong interests coming to invest from some of these countries. Not necessarily these restrictions limit investments from these countries. But I think the major challenge in my perception has been wrong policies.”

The U.N. diplomat urged the Zimbabwe government to enact investor-friendly laws and to continue engaging countries that imposed sanctions on senior officials of the government and some state-owned companies in 2002. Parajuli is moving to India to head the World Food Program after serving in Zimbabwe for five years as the country’s U.N. resident coordinator.

Uganda: Bobi Wine Has Already Changed the Opposition. Can He Change the Government?

REVEALED: Nigerian Army Commander, Brigadier-General Ahmed Ibrahim Taiwo, Who Claimed No Killing Occurred At Lekki Toll Gate Despite Evidence Is Son Of Late Colonel Behind Killing Of Over 700 Civilians In 1967 Asaba Massacre