Youths; VoteNotFight or Fight and Bear The Consequences. 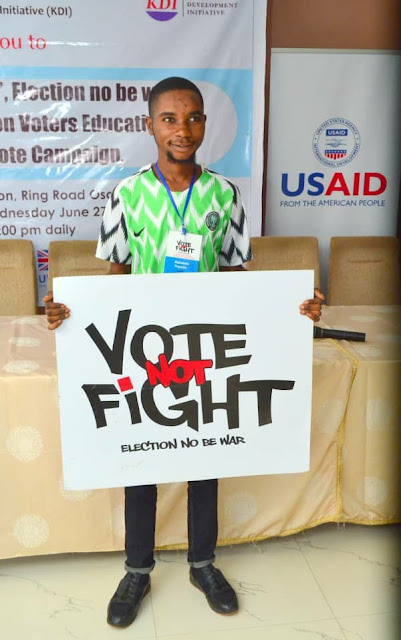 VoteNotFight or Fight and Bear The Consequences.

In a quest to remove the societal clutters! I candidly submit that the active participation of youths in politics can never be overemphasized for they are major players in the game, thereby influencing the society either positively or negatively.

Well, it’s not an out of the blues occurrence for an individual to take sides and give maximum support to a political aspirant that you believe in but it’s a functional disorder of the highest order when youths are being used as political thugs and touts during campaigns and election periods to displace and misplace the peaceful atmosphere.

It’s so saddening that desperate politicians give ammunitions to youths (the said future leaders) to carryout illegal activities for their own selfish interests and riotous appetite.

Funny how some vulnerable, sarcastic and foolish youths too turn themselves to political struggle puppet when cajoled with cocktail futile promises of a future that only God can give.

Did I just say FOOLISH!

Yes, I said it “Foolish! “If selfish politicians still uses you as an illegal bulldozer to clear all obstacles to their aspiration. As a youth, you are meant to control your fate and not leave it as a puppet into the hands of some condescended sapiens.

Perhaps, if you support or believes in the aspirations of a candidate, you’re supposed to Vote Not Fight because Election No Be War.

I stand to be quoted and I owe no one an apology for my statements.

Why don’t you dare them to give the same assignment to their children if you’re sensible enough! It’s absolutely impossible, because “Senseless people are created to act like machineries to sensible ones.

Do you still want to turn election to war? If you lose your life during the cause of fighting, “Nothing Dey Happen” (2Baba’s voice). They will continue their own life, their children will continue to live fine, Nigeria will not seize to exist and heaven will not fall.

Just a moment, did you just give an excuse that they promised you ready,made juicy appointments as Special Advisers, Commissioners etc? That’s too good to be true, a promise meant to be given as a food to the baboons.

Even some baboons have brain, they won’t take that as food. You must be so naive for falling for such tricks, can you give official appointment to someone that the personal profile is full of criminal records? Or do you still eat nylon wrappers after eating the biscuits inside? Of course NO! Rule for such is tagged “Use and Dump”.

Can’t you ponder? I hope this piece of mine helps you regain your sight to Vote Not Fight because Election No Be War.

0 comments on “Youths; VoteNotFight or Fight and Bear The Consequences.”