What Really Cause Olamide and Don Jazzy Fight At #TheHeadies2015 Award

Mavin act, Reekado Banks won the Next Rated Award at the Headies2015.

During The Headies Award Show, While Adekunle Gold and The YBNL Crew came out to receive Gold’s Award for The Best Alternative Song – Sade, Olamide Pulled a “Kanye”.

Olamide Further said on stage that

Award would go to Reekado Banks.

A very pissed off Olamide after his whole speech threw the cup he was holding and slammed the mic and walked off stage.

Few Minutes Later, an award for the Special Recognition was awarded to Don Jazzy, and the Mavin Boss came out to receive the award and gave a short speech.

Don Jazzy who is known for not coming on stage to receive awards noted that he came down to the Headies to Support his Children (Dija, Korede Bello and Reekado Banks).

Apparently, after giving about 3 points, the Mavin Boss replied Olamide’s previous rant on stage. He said and I quote:

“Bros Olamide, If you want the car, come and collect it”

To Add Salt to the Whole Injury, Don Jazzy said he could afford to buy cars for his “Kids”

After This Epic reply from Don Jazzy, Di’ja could be seen laughing really hard and dancing. 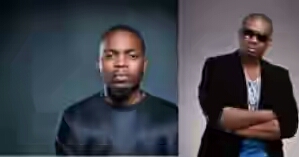