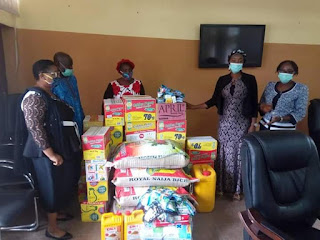 The welfare of the citizens of the State of Osun is paramount to the Government of the State.

This disclosure was made by the Honourable Commissioner for Women, Children and Social Affairs, Barr. Olubukola Olaboopo, while presenting relief materials to the Association of Orphanages and Home Operators in the State.

Barr. Olaboopo mentioned that the state government appreciates  the services of orphanages in the State as partners in the care of the abandoned, the less privileged and the vulnerable.

She identified that the Covid-19 pandemic, no doubt affects the source of sustenance of the orphanages during this period, hence, the gesture on the part of the ministry to give back to them from her widow’s mite. 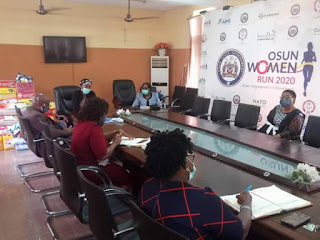 She urged them to remain passionate and committed to the service.

While speaking the Chairperson of ASOHON Pastor Mrs. Adetutu Adisa appreciated the state government for extending kind gestures to them mentioning that  the gesture is unprecedented and that it caught them unaware. In her words, “It is noteworthy that, the Orphanage homes in the state of Osun are very grateful for the government gesture towards us, this unprecedented and unexpected”
She promised  the support and cooperation of the members of the association to the state government.

The Permanent Secretary in her opening remarks seized the opportunity to urge them to pay up their renewal fees. Items donated to the orphanages include bags of rice, cartons of noodles, kegs of vegetable oil, diapers, toilet soaps, detergents amongst others.

Also Present at the brief presentation were the Permanent secretary of the ministry Pharm. Omolara Ajayi, Directors in the Ministry and Representatives of Association of Orphanages.

In another development,
the Government of the State of Osun has vowed that she will not tolerate the abuse of children in the State.

This assertion was made by the Honourable Commissioner on Tuesday, the 19th May, 2020, when she ordered the withdrawal of a 9year old boy from his mother who naked him, tied him and put him in a sack for 4days without food.

Barr. Olaboopo stated that the woman would be handed over to psychiatrists for evaluation of her suitability to have custody of the 2children withdrawn from her. She mentioned that she would also be subjected to rounds of counselling sessions after the evaluation.

The Commissioner  appreciated the good people of Fesojaye community, Owode Area, along Ilesha road, for their prompt intervention and action in rescuing the boy from the snares of cruelty.

She urged parents to caution themselves at all times in treating or disciplining their children or wards reiterating that it is only normal and psychological for children to behave in a particular pattern at certain ages in their existence.

She stressed further that parents should curb themselves from visiting their financial and emotional aggressions on innocent children. She warned that anyone caught henceforth in the maltreatment of a child would be subjected to criminal standard procedures.

Some Nigerians Don’t Pray For Their Soldiers, They Only Wail — Femi Adesina