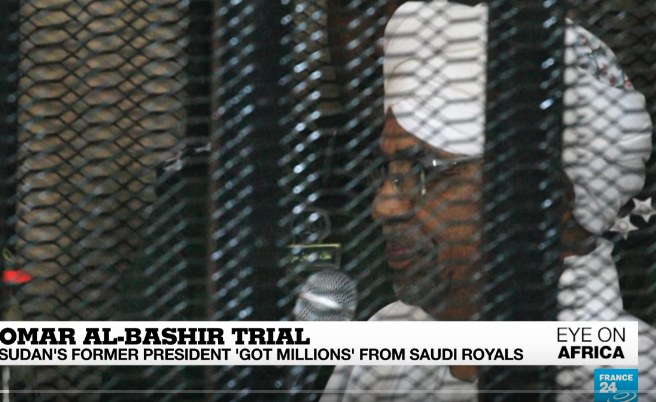 Khartoum — Khartoum special criminal court faced the former President, Omer Al-Bashir with charges under articles 5 and 9 of Foreign Currency Act , articles (6), (7) and (9) of the Illicit and Suspicious Enrichment Act and breaching the 2019 Emergency Orders of the articles (3) and (6).

The court, which resumed sittings Saturday amid exceptional security measures at premises of the Judicial and Laws Institute in Khartoum and before Judge, Al-Sadiq Abdul-Rahman Al-Faki, rejected the defense request to release the defendant on bail justifying that the law does not allow bail in crimes with penalties reach ten years in addition to that the defendant faces other information in other cases as well as precaution from the court to prevent escaping.

During the Saturday’ sitting the court interrogated the defendant Omer Al-Bashir who responded to the question that sum 25 million dollars were sent to him by Saudi Crown Prince, Mohamed bin Salman through special envoy and with private plane and that former director of his office, Hatim Bakheet who did not the money in Central Bank of Sudan as the money were sent privately in support of specific circles and that he possesses documents proving spending the said money.

The defendant said that he wanted a close-door sitting so as names of persons who sent that money would not be released and cause embarrassment to them.

The prosecution dismissed one its witnesses who was supposed to be heard in today’ sitting while adjourning hearing of the other pending return from a training session in Cairo.

The court will hear in its coming sitting on next Saturday defense to director of Sin Flour Company , Tareq Siral-Khatim and director of the defendant office, Hatim Bakheet as witnesses of defense.

On The Naira Free Fall By Kunle Wizeman Ajayi