Sri Lankan President Maithripala Sirisena wants a public beating of local concert promoters after fans threw their bras on stage during an Enrique Iglesias show.
The performance in question took place in Sri Lanka’s commercial capital of Colombo on December 20.
The hordes of fans who paid what was locally high costs for tickets were set to enjoy the show to the fullest, with a number of women throwing bras onto the stage, and even a few rushing to try and kiss the singer.

President Sirisena said that the organizers of the event should be, “beaten with poisonous stingray tails” for creating such an environment. He also said there is no need to beat the, “uncivilized women who removed their brassieres,” implying that they were just victims of their surroundings.

In response to the harsh comments, the company behind the show stated that security “failed alarmingly,” along with apologizing for people who paid for better seats being pushed out of the way by rushing fans. While they stopped short of offering refunds, it’s clear that the folks at Live Events fear the President’s wish might just be fulfilled.
President Sirisena stated that, “these indecent concerts should never receive authorization again in Sri Lanka.” 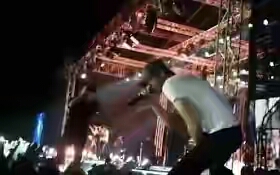