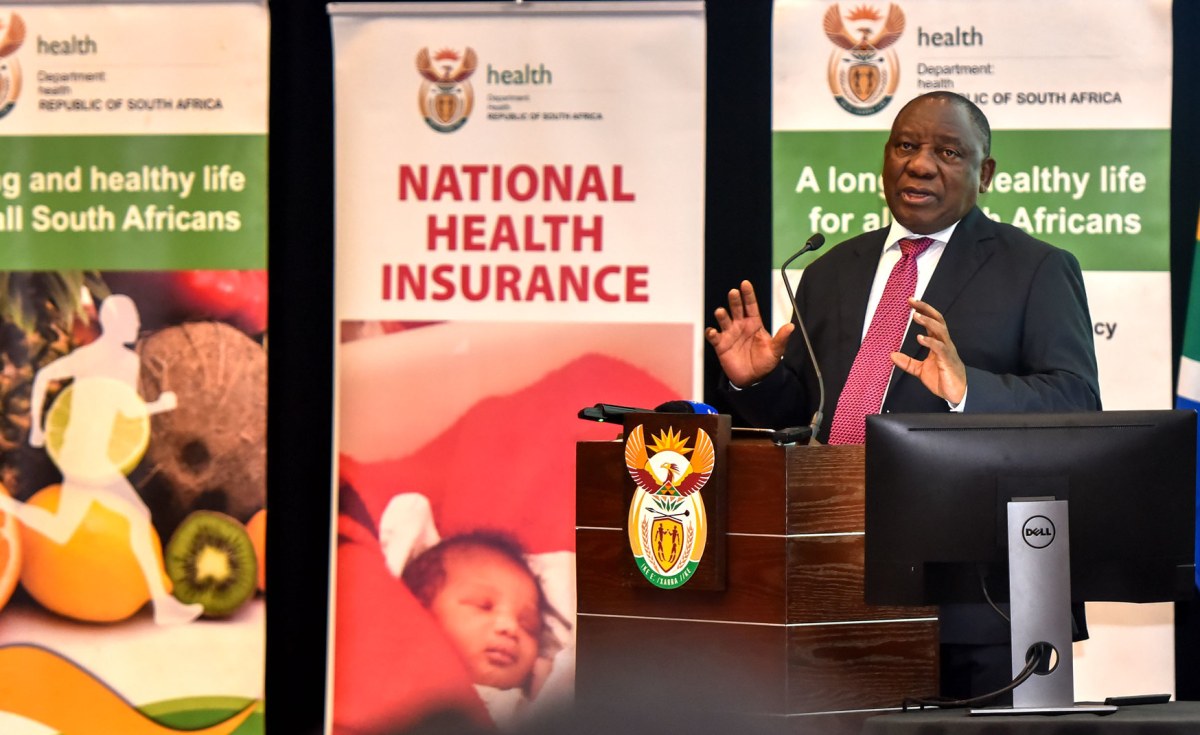 But the Bill has sparked a great deal of controversy. The impact on private health care, quality of service and the government’s ability to manage such a complex system have been widely questioned.

One of the toughest questions being asked is: how on earth will it be funded?

The memorandum on the objects of the Bill explains that the NHI will be financed in various interrelated phases as determined in consultation with the National Treasury. Costing estimates vary from the health department’s “guesstimated” R259 billion last year, to the Institute of Race Relations calculation of R450 billion.

National Treasury is currently doing the costing exercise. It has said it will release more information at a later stage.

What’s known about the funding proposals can be gleaned from the Bill itself. These four proposals target the same low-hanging fruit, namely income tax.

The main public health funding stream consists of around R150 billion per year, which would be tapped for the NHI. The memorandum notes that this shifting of funds would occur in one of the later phases, and would require amendments to the National Health Act of 2003. It would also be dependent on how functions are shifted from provincial to national level; for example, if central hospitals were brought to the national level.

Source 3: Payroll tax on employeer and employee: The memorandum envisages that the payroll tax will be “small”. The Bill does not, however, quantify its “smallness” – or indeed, the magnitude.

In my view this payroll tax is in essence a tax on labour and productivity. For example, the payroll tax would inevitably result in reduced earnings or, worse, job losses.

Source 4: Surcharge on personal income tax: The Bill does not contain any information regarding this surcharge, other than that it would be charged on an individual’s taxable income. This extra tax on taxable income could be viewed as a penalty (or disincentive) for increased productivity and wealth – yet another reason why some might participate in the silent tax revolt.

Despite not knowing the percentage of additional tax that might be levied, it is important to look at the number of taxpayers who will have to bear this additional tax. This metric is called the tax base.

The country has a narrow tax base, defined as the number of individuals who were assessed for personal income tax. This is not to be confused with the number of registered individual taxpayers, which has increased by 4.9% from 2016/17 to 2017/18. The increase may be ascribed to the revised employee registration process which was introduced by the South African Revenue Service in 2010.

This process requires employers to register all individuals and issue them with a tax certificate, regardless of the amount of income earned. However, many of these taxpayers fall below the tax threshold and are thus not assessed. They are also not liable for the tax employers deduct from salaries and wages and hand over to the South African Revenue Service.

In contrast, the personal income tax burden shouldered by these individual taxpayers has increased. This can be expressed as the average personal income tax paid per assessed taxpayer. In the 2013/14 tax year, the tax burden amounted to R45,702. This burden expanded to R65,601 in 2016/2017, representing a whopping 43.5% increase from 2014 to 2017.

The overall result is that relatively fewer taxpayers have to carry an increasing burden of tax collections. Given the country’s poor economic outlook, credit rating downgrades, high unemployment figures and the myriad of social grants paid to millions of dependent individuals, it is clear that the tax base is already severely strained.

The NHI will simply add to this burden.

The Bill attempts to make the extra tax burden more palatable by saying that the money will be collected “in accordance with social solidarity”. This is an interesting phrase used by the drafters of the Bill. “Social solidarity” is a concept that was developed by the Frenchman Émile Durkheim in the late 1800s. Its core principle is that of collective action and enabling individuals to feel that they can enhance the lives of others.

The social solidarity envisaged by the memorandum is that of income cross-subsidies between “the affluent and the impoverished”. All well and good, until one considers that the payment of taxes is not a voluntary action done for the wellbeing of others. It is a legal obligation imposed by the State on its citizens. Social solidarity, therefore, implies a sense of altruism. A duty to pay income tax can hardly be said to be an act of selflessness.

Of course, what probably offends most taxpayers is not the communist undertone of social solidarity, which harks back to “from each according to his ability, to each according to his needs“. Rather, it is the sense of frustration with a government rife with corruption, the widespread misuse of public funds and the brazen lack of accountability. The NHI funding proposals may very well be perceived as adding insult to injury for the 4.9 million individuals paying personal income tax.

It is somewhat of a relief that (according to the memorandum) tax options will only be evaluated as part of the last stage of implementation. Hopefully, the National Treasury will do a full impact analysis and take into account the economic and fiscal environment prevailing at the time.

0 comments on “South Africa: Taxpayers Will Bear the Brunt of National Health Insurance”

Zimbabwe: The Crisis in Zimbabwe – A Paradigm Shift