Osun Commissioner For Special Duties, Badmus, Rejoices with Muslims on the Celebration of Eid-el-fitr 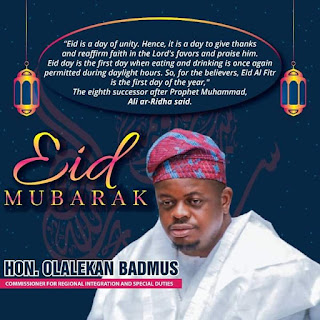 The State of Osun Commissioner For Special Duties and Regional Integration, Hon. Olalekan Badmus (Omoolore), has rejoices with the Muslims Ummah in the state of Osun and the Nation on the successful completion of the 1441AH Ramadan fast and the celebration of Eid-el-fitr festival.

This is contained in a statement made available to the newsmen in Osogbo, the State Capital.

He urged Muslims to promote a life of sacrifice, charity and love for one another.

According to the Commissioner, I felicitate with the Muslim faithful on the occasion of Eid-el-Fitr after completion of the Ramadan fast, a major pillar of Islam.

“The Holy month of Ramadan is an opportunity for our Muslim brothers and sisters to deepen their relationship with Allah, promote life of sacrifice, charity and love for one another.”

Noting that the  government led by Governor Gboyega Oyetola was committed to promoting peaceful co-existence in the state, the Commissioner added, “I urge all Muslims in the State of Osun to sustain these values even after the holy month to build a prosperous and peaceful State of Osun where everyone can actualise their dreams.”

0 comments on “Osun Commissioner For Special Duties, Badmus, Rejoices with Muslims on the Celebration of Eid-el-fitr”