No respite yet for troubled Naira

The desperation of the Central Bank of Nigeria (CBN) to defend the naira at all costs comes with heavy burden on the economy and bank customers. Despite spending over $33.5 billion in seven years to stabilise the local currency, restricting debit card use overseas and planning to stop weekly dollar allocations to Bureaux de Change (BDCs), the CBN is yet to stop naira’s woes. COLLINS NWEZE examines naira’s slide and those benefiting from the trend.

Aminu Abudulkadir, a currency speculator, was preparing for the Suri (2’oclock) prayer when he got a text message that made him richer. His business partner, Abubakar Idirs, had on December 18, informed him that the naira was exchanging for N280 against the dollar in the parallel market.

Abudulkadir hurriedly said his prayer, moved to the vault where he kept $50,000 to confirm it was intact.  He then called five of his most trusted aides and gave them $10,000 each to exchange to naira. “I made N82 extra on every dollar sold because I bought at N198 to a dollar,” he said, adding that the transactions concluded within three hours fetched him N4.1 million profit.

The naira has been exchanging at N199 to a dollar in the official market, but in the parallel market, the local currency is facing the highest level of volatility in its over 50 years’ history.

It was not only devalued by 35 per cent in the last 14 years, but in 2001 alone, its value was slashed 27 per cent, followed by an eight per cent cut last November. The local currency first hit double digits in 1991, moving from N9.9 to N17.2 to a dollar the following year. That constituted a significant 73.7 per cent change. Thereafter, a continuous slide ensued, attaining triple digits in 2000. Although it was considerably stable between 2000 and 2003 (below N120 to a dollar), the recent adverse global capital flows and drop in oil price, among other factors, have culminated in the current all-time low.

An economist, Bismark Rewane, explains why the naira is on the downside. “As oil prices dipped, the Central Bank of Nigeria (CBN) has prioritised stability of exchange rate in the official market. It has drawn an exclusion list of avoidable imports from being funded in the official market. With the foreign exchange demand for the items transferred to the parallel market, rates in that market have soared”.

Besides, other factors like terms of trade, inflation differential, public debt, current-account deficits, interest rates, political stability and the overall economic health determine the exchange rate of a currency.

The fall in crude oil prices has reduced Nigeria’s dollar earnings, making it difficult for the apex bank to fund imports. Record oil prices had helped Nigeria to build the largest currency reserves in sub-Saharan Africa. The price peaked at $63 billion in September 2008. But, after attaining a record-high of $147 in July of that year, Nigeria’s crude oil prices – bonny light, have plummeted.

As at December 29, oil was trading below $38 per barrel and the foreign reserves level has declined to $29.48 billion, $33.5 billion lower than the September 2008 figure.

A large chunk of the reserves went to Bureaux De Change (BDCs) operators as weekly allocations to help close the rising gap between the official and parallel market rates. The BDCs got between $75, 000 and $30, 000 weekly from the CBN. There are, however, a grand plan to stop funding the BDCs in the New Year.

Today, oil sits at $37 a barrel. Goldman Sachs recently agreed it could tumble as low as $20 a barrel, a level that would decimate the already heavily damaged economies of Nigeria, Saudi Arabia and Russia. The Organisation of Petroleum Exporting Countries (OPEC) predicts the price won’t go back above $100 until 2040.

These weak economic indicators and forecasts have continued to put the local currency under severe pressure from internal and external factors but the CBN is not giving up, except that its measures seem overboard, with varied implication 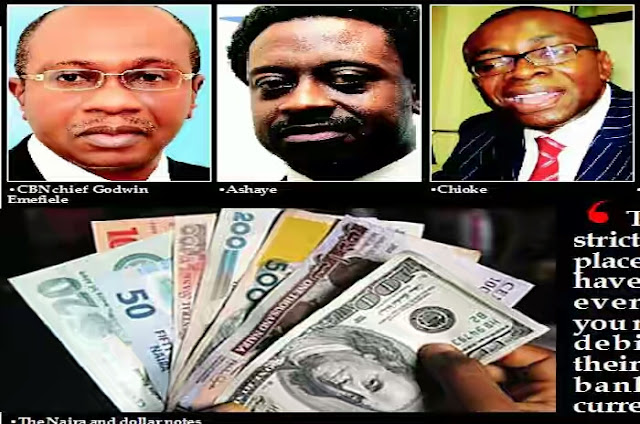 0 comments on “No respite yet for troubled Naira”