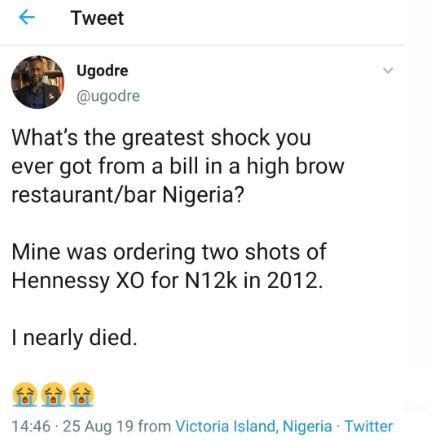 Twitter user @ugodre asked this question today, ‘what’s the greatest shock you ever got from a bill in a high brow restaurant/bar Nigeria?’.

The responses below will leave you in stitches…

But a friend of mine walked into a barbers shop on the island to have an emergency haircut.

When I mean haircut, I mean Abolo, what is called clean shave, nothing fancy.

Went to Beer Barn in Abuja around 2011/2012. Waiter said Patron was 10k per bottle. We drank 4 thinking we’ll split 40k amongst 3 of us. The bill came at 19k per bottle. The waiter said she made a mistake? @bigwales

Tok a babe for a movie o at Leisure mall, dat’s how she stops at a perfume store for me to pay for a 27k perfume.

I summoned courage took her to talk, I told her the plan was for a movie & she gave me that it’s just a perfume look, dat was how I left her at the perf for my movie

Went to visit this babe lodging at Hotel Presidential PH. She had called earlier I should buy 2 big eva for her whilst coming.

Forgot to buy and while there majestically walked into the bar to get 2 big eva.

I use shame pay o. In my mind, NEVER AGAIN

Not me but my brother….Sage Hotel in Benin City. Pasta AKA spaghetti was what was ordered as a quick fix before we hit the road to return to Lagos. One small portion with no additives o…that’s how bill came – 11k. We grudgingly paid to save face

Having to pay N850 for a bottle of water @ exclusive stores that I normally buy for N90 @Shoprite_NG
I refused to pay, after plenty dragging.
My friend paid for it. Outside, he collected his money back. Since then, learnt not to open a bottle till I know the price.

God saved me o. I got to Abuja. I was hungry. Entered one joint like that,ordered for food. As the waiter was heading to the counter,I called her back,asked how much,she said 8,500. I fled like bolt to buy 2 gala and malt.

Sigh! I was hustling jejely in Abuja way back. Went to Hilton to see an Oga, met Nwa baby in the elevator. Sharply collected number. Asked her days later where we can have lunch. Oh you’ll like their seafood platter. I did enjoy it. Bill came & I apologised to my ancestors.

My Gf at the time convinced me to cut my hair at the place she does her nails. The location was V.I don’t know why I didn’t ask before hand, got my hair cut time to pay and that’s when I noticed they had pos and the haircut was 5k.

At Rufus and Bees, 4 pieces of puff puff filled with chocolate for 3k

I was at a bar in VI, went to watch match. Order 2 Heineken… I had looked at the price list it was 1.5k.

Only for waiter to bring 2 cans!!!

That was the last time.

I laminate and file all these invoices. The day any girl’s umunna asks me about bride price eh…………. pic.twitter.com/zeDoTyvq7K

Friend invited me out to Auto lounge about 10-12 years ago as he was meeting some Kenyan blind date. She turned out to be a stunner, my boy forgot himself and started ordering champagne non stop to impress. Bill came to 380k and guy spent the next 6 months paying that bill ??‍??

Ojo this thread! Mine isn’t food sha. My husband @etunjipius was trying to get me to start using makeup before we got married. Went to ICM in 2017 & he took me to the Mac store. Settled for one lip pencil, lip gloss & ?. Bill came & I saw 31k! I felt sooo bad & kept apologising.

A restaurant in Maitama, Abuja. When the bill came the first thing that caught my eye was the bottle of Eva water. 2,000 naira.
I choked ten ways to Sunday. The food? 10,000 for a bowl of soup and handful of eba.

It was at Salma Lebanese restuarant in VI. All they gave me was shawama bread and a watery thing like that.. Thats all oh, bill was more then 20k. This big man life is not for my me, I have decided.

Oriental hotel 2016 while waiting for a client decided to order Gulder without looking at the prices and Menu, was like at all at all #500 per bottle, after 3bottles Bill was #4,500, I nearly jump inside water ??????

Mine was during my NYSC, I collected my allawi. I want flex a close friend and his guys to pay him back for his good deeds. We got to club, 10 of them took a bottle of beer each. When is time to pay, I discovered that each cost 1k, total is 10k while my allawi is 9k500. ????

Paid 120k for Chinese at Zen garden. What annoyed me was the 10k service charge. Never again.

I once tok a friend to the beach and she was eager to get on the horse, that was how I called one w/o asking for the price. She rode for like 5mins, when i asked for the bill, guy was Oga ur moni na 60k

2014, food wey dem give us for training no do me, I asked for extra semi Nd soup. After eating they said the extra was 3500. Meat no even de the nonsense.