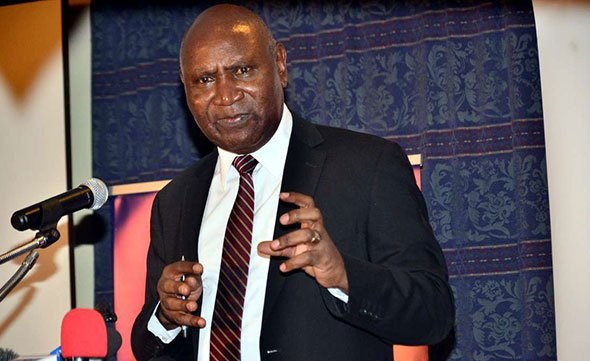 Auditor-General Edward Ouko wants amendments to the Constitution to create a Head of State separate from the head of government, who will work independent of each other to help protect his office from the wrath of an imperial presidency.

Mr Ouko says a Head of State will shield his office from being taken down by a powerful President since auditing the executive is equal to auditing the President as they are his appointees.

As he gave his reflections on an eight-year, tumultuous, non-renewable term in office which ended Tuesday, Mr Ouko also said that before the Treasury is allowed to read its annual budgets with fanfare in Parliament, his office should first give a report card on how the government utilised the resources of the previous year.

“Under the current system, the auditor is up against the President and his ministers. If the President is protective of his ministers, then the audit is watered down,” Mr Ouko said at a public lecture as he reviewed his performance as the first auditor-general in Kenya under the new Constitution.

He said by having the Head of State different from the head of government, his office will have a protector and this will help make it more independent.

“My wife told me, ‘you have to be careful’,” Mr Ouko said as he recalled some of his turbulent times.

Analysts have praised Mr Ouko as having had a stellar performance in terms of pointing out shortcomings of the government’s financial accountability and exposing corruption. A good chunk of his audit reports, however, were never acted upon by investigative agencies. “I think he has performed the way an independent Auditor-General should. There were attempts to take away the independence of the office but it is good it never happened,” Mr Robert Shaw, a public policy and accounting expert, told the Nation.

“He helped us understand what is being stolen; but like all auditor-generals, he was not the arresting entity. His job was to put facts on the table, which he did. The only weakness is these audit reports ended up there,” explained Mr Shaw.

A crunching of numbers from the eight annual audit reports he released during his time in office, but continue to gather dust as investigative agencies and Parliament prefer to look the other way, shows taxpayers lost an average of Sh1 trillion every year through questionable spending. This means for the past eight years, Kenyans could have possibly lost Sh8 trillion to corrupt individuals and tendering cartels shielded by leaky government finance systems and corrupt public officials.

While the annual audit reports released by Mr Ouko’s office do not explicitly say that the staggering amounts were actually lost, they were not accounted for properly, which means a good chunk of the money may have indeed ended up in the pockets of some individuals. Since 2011 when Mr Ouko was hired as Auditor-General, the gross estimated government expenditure has increased from Sh1.17 trillion in the 2011/2012 budget to Sh3.02 trillion in the current year, representing a growth of 158 per cent. This staggering increase in spending, however, has grown in tandem with the amount of money whose spending is either suspect or cannot be accounted for.

In 2017, Sh5.1 billion collected as revenue was not remitted to the Kenya Revenue Authority (KRA). In the previous year, Sh3.7 billion did not make it to KRA despite being collected while in 2015 Sh3.1 billion got lost between the collection points and Times Tower. Likewise in 2014, Sh2.7 billion, which was collected as tax, was either pocketed by individuals or was not filed correctly.

Then in 2013, the collected revenue was worth Sh813 billion. Out of this, Sh801 billion did not have proper records, hence the accuracy of the amount collected could not be verified. This means that poor record keeping could have helped some State officials steal some money without the chance of being caught.

Parliament has indicated that it will spend Sh41.2 million to audit the financial statements of the Office of the Auditor-General itself, whose auditing has been pending for the past four years. The National Assembly’s Public Accounts Committee last month procured the services of PKF Kenya to audit Mr Ouko’s office.

But even as Parliament embarks on auditing the Auditor-General’s office, investigative agencies have a huge responsibility of nailing culprits in government institutions where questionable spending had been flagged by Mr Ouko during his term.

To date, use of the first Sh215 billion Eurobond remains the subject of lingering doubt in the minds of Kenyans, with the government only explaining that the money was mixed with other funds and disbursed to various departments, making it hard to trace. The last time the matter was heard was when Mr Ouko said he had sent investigators to the United States to trace the money.

On Tuesday, President Uhuru Kenyatta warned corrupt State officials to be ready to carry their own cross when investigative agencies, led by DCI and office of the DPP, come for them.

“When they catch up with you, just know I don’t give instructions to them. It is you who has been caught on the wrong. We will only read it in the newspapers that you have been caught,” warned President Kenyatta while seeing off the first batch of crude oil from Kenya in Mombasa.

In the past six years alone, a total revenue of Sh5.5 trillion was collected by the tax collector. However, out of this money, only Sh628 billion received an unqualified opinion from the Auditor-General, which means that it was properly accounted for. A staggering Sh4.8 trillion during the past five years was either not spent well, was lost or was not properly accounted for.

Some of these money ended up in unfinished projects, inflated payments or was outrightly stolen. Take the Kimwarer Dam scandal, which Mr Ouko flagged just a week before high ranking State officials, led by suspended Treasury CS Henry Rotich, were arrested.

It had not been approved by the executive. Mr Ouko in his report for the year ended June 2018, says while the Cabinet approved Arror Dam project in a memo in 2008, it did not approve Kimwarer.

While those accused of being responsible for the dam scandal wait for their date in court, those responsible for the purchasing of a building in Kampala by the Ministry of Foreign Affairs for Sh650 million, Sh500 million more than the market price as indicated in the 2015 audit, continue to walk free.