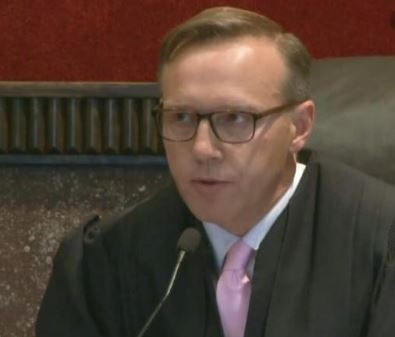 On Monday, August 26th, a judge  found Johnson & Johnson responsible for fueling Oklahoma’s opioid crisis and ordered the health care company to pay $572 million to remedy the devastation brought by the epidemic on the state and its residents.

Cleveland County District Judge Thad Balkman’s landmark decision is the first to hold a drugmaker culpable for the fallout of years of liberal opioid dispensing that began in the late 1990s, sparking a nationwide epidemic of overdose deaths and addiction. More than 400,000 people have died of overdoses from painkillers, heroin and illegal fentanyl since 1999.

“The opioid crisis has ravaged the state of Oklahoma and must be abated immediately. As a matter of law, I find that defendants’ actions caused harm, and those harms are the kinds recognized by [state law] because those actions annoyed, injured or endangered the comfort, repose, health or safety of Oklahomans,” Balkman wrote in the decision.

With more than 40 states in US lined up to pursue similar claims against the pharmaceutical industry, the ruling in the first state case to go to trial could influence both side’s strategies in the months and years to come.

Attorneys around the country cheered the decision, saying they hoped it would serve as a model for an enormous federal lawsuit brought by nearly 2,000 cities, counties, Native American tribes and others, scheduled to begin in October.

The judge did not grant  the state everything it sought. State attorneys had asked $17.5 billion over 30 years for treatment, emergency care, law enforcement, social services and other addiction-related needs. But the judge concluded it would cost $572 million to remedy the crisis in the first year, based on the state’s plan. He said the state did not provide “sufficient evidence” of the time and money needed to respond after that.

Johnson & Johnson, which has denied any wrongdoing, said it would appeal the decision. “Janssen did not cause the opioid crisis in Oklahoma, and neither the facts nor the law support this outcome,” said Michael Ullmann, general counsel for Johnson & Johnson.