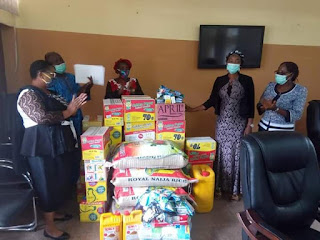 A student of Usmanu Danfodiyo University, Sokoto, Nassirou Fidyat Atinuke, has on Monday, 18th made an outreach to the inmates at the popular Nigerian Correctional Service, Agodi Custodial Centre, Ibadan, Oyo state.

The outreach made to the custody was led by the founder of Deeyah Charity Foundation. The foundation’s charitable activity is usually made during Ramadan by providing for the needy and the vulnerable people who find it difficult to put food on their tables before and during Ramadan.

Speaking with PEN PRESS UDUS, Fidyat reveals the genesis of the foundation, reiterating that the foundation has provided a fast breaking meal (Iftar) for the inmates who are fasting in the custodial center.
“The foundation is known to be a charitable organization that provides for the needy and the challenged ones, most especially those who find their day-to-day meals difficult.

“We carry out our charitable activities all times because we have some sponsors who breathe into the foundation’s pocket. So, we have decided to also make a fast breaking meal (iftar) for people, including the fasting inmates in the State Correctional Center as one of our Ramadan inter alia projects.” She revealed.

Despite denying the foundation to meet one-on-one with the inmates because of current coronavirus pandemic, the outreach made was welcomed by correctional warders at the entrance of the center.

PEN PRESS UDUS in an interview with a warder who pleaded anonymous, said he addressed the foundation and thanked them of their charitable activities towards the development of the country.
“We were so glad to receive their gifts for our people here, indeed they have done well in promoting and developing the country.” He said.

He further pledged that they would ensure the proper distribution of the palliatives to the owners (inmates).
“We told them they can’t be chanced to meet the inmates because of the social distance order in the country but we will make sure we distribute the foods to them equally.” Anonymous Warder concludes.