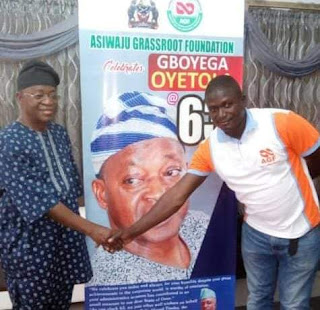 Sikiru said the present administration under the leadership of Governor Oyetola has brought massive development to the state through its notable programs.

He was speaking while fielding questions from journalists in Osogbo, the state capital of Osun on Friday.

The AGF Coordinator who described Governor Gboyega Oyetola as the people’s Governor, who mean well for the people of the state, said that the Governor has also mapped out strategies to combat crime in all ramifications.

Sikiru who said Oyetola’s achievements within the last one year cannot be overemphasised, said Oyetola’s developmental agenda cut across every facet of life.

He  said that Governor Oyetola has equally done tremendously well in the area of health sector which he said why he rehabilitated not less than 335 Primary Health Centres in the state.

Sikiru noted that the governor has been able to sustain the payment of full salaries to workers, a development he said has endeared him to all workers in the state.

According to Sikiru, Governor Oyetola since he assumed office one and half year ago swung into action and ensure he brought back the lost glory in the Agricultural sector, Mining, Culture and Tourism, Health for the development of the state .

He further explained that the Governor, who he described as a gentle with cerebral administrative skill, has also done tremendously well in the area of roads construction, despite the meagre resources and little allocation accrued to the state.

Describing the present administration as a continuity of good government, Sikiru noted that Governor Oyetola, immediately he assumed the mantle of leadership, ordered for the continuation of Ilesa garage/Stadium dua carriage road, Osogbo/Ikirun, Ikirun/Ilaodo Kwara road and Gbongan/Odeomu road which he (the governor) said must be completed within the stipulated period of time.

According to him, the governor would continue to embark on more civil-oriented projects, just as he lauded the governor  for being responsive to the yearnings of people of the state.

“The governor has been performing tremendously well, he has been able to sustain the payment of full salaries to all categories of workers including pensions to pensioners.

“Rehabilitation of 335 Primary Health Centres, rehabilitation and construction of roads across the state, lighting up of major roads to ensure safer night movement and many others that are glaring to the public eyes.”

Speaking on the dreaded Coronavirus pandemic and how the state has been able to handle the situation, Osun AGF Coordinator said if not for the proactiveness of the Governor the cases of the virus would have risen beyond control in the state.

Sikiru said Governor Oyetola as part of the efforts to combat the pandemic and kick the virus out of the state gave stay-at-home order just as he embarked on aggressive public enlightenment on covid-19.

He further explained that the Governor established a well equipped Isolation centres in Iwo and Asubiaro apart from another state-of-the-art Isolation centre he recently commissioned at Mercy Land, Osogbo as part  of effort to compliment the effective and efficient management of the Coronavirus Pandemic in the state.

The AGF Coordinator however enjoined residents of the state to adhere strictly to the Precautionary Measures put in place by the state government  by always maintaining social distancing directive, washing of hands regularly, keeping of personal hygiene and avoidance of gathering among other so as to be curb the virus from spreading.

He also urged the people of the state to continue to support the present administration in its bid to take the state to the greater heights.
Ends

N10million Ransom: We Asked Kidnappers Of Abuja Orphans If They Knew Their Victims Had No Parents – Source

FLASHBACK: ‘Where Are The Cows? Is Evans A Herdsman?’ — When Tinubu Spoke On Murder Of Fasoranti’s Daughter

Kenya: Talk of a Rotational Presidency Heats Up Political Climate