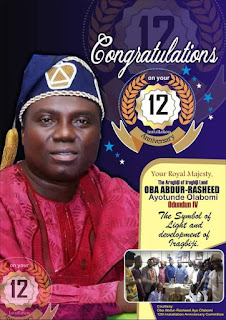 The monarch who had earlier set up a 28-member committee preparatory to his anniversary formerly billed to hold on Friday cancelled the anniversary and shifted it to a date to be announced in future.

Oba Olabomi, in a statement by his Personal Assistant on Media, who is also Secretary of the Committee, Mr. Jimoh Olorede, postponed the celebration in compliance with government directives on cancellation of social gathering and other COVID-19 related safety precautionary orders.

The monarch whose reign in the last twelve years has been of great impact in Iragbiji, having been installed on May 22, 2008, has however decided to mark the historic day via solemnization by organising a social distancing adherent prayer session with his chiefs, immediate family and few selectively invited well-wishers.

However, the Coronation Committee headed by Dr. Oyeleke Ajiboye had, after relaxation of the lockdown order by the government, resumed work on physical projects that were initially meant for commissioning.

According to the statement, all arrangements made towards the anniversary are intact for the celebration of the coronation at a new date that would be made public as soon as the world wins the ongoing war against the deadly virus.