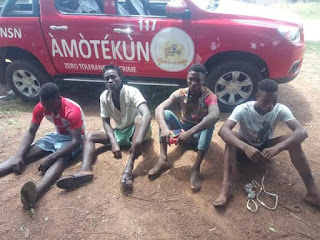 Three suspected burglars and their herbalist were arrested at Ila-Odo in the early hours of today, in an operation carried out by Amotekun corps, state of Osun.

The ring leader, Sola Taiwo (a.k.a Shadow) had been trailing by Amotekun undercover agents, after he had successfully burgled a house about two weeks ago. 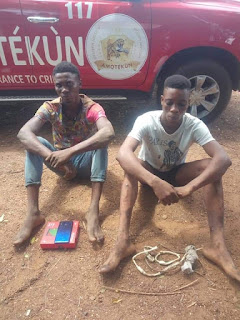 Luck, however, ran out of him when a sex worker seized a phone he stole in the last operation because he refused to pay her for the service rendered.

The sex worker was used as a bait to arrest ”Sola Shadow”, who subsequently led Amotekun corps to other suspects.

On sighting men of Amotekun corps, he tried to escape but was overpowered after about five minutes of horse race.

The other suspects are Samson Adedokun (18 years) Kazeem Saka (20) and 22-year-old Rafiu Azeez, their herbalist.

Three of them were said to be tailors, except Rafiu Azeez, the herbalist.

Items recovered from them included an Android Phone and various types of charms.

The suspected burglars had since been handed over to the police.

Africa: Trump Impeached a Second Time – but Trumpism Will Live On