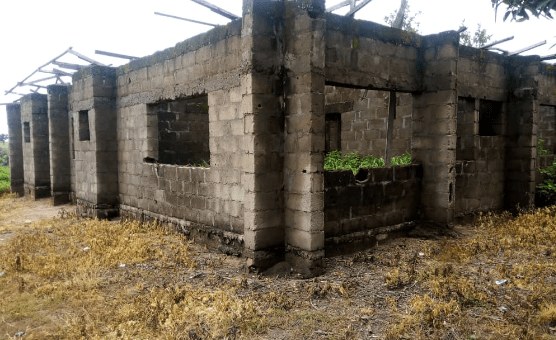 The village of Gomani lies inward from Yangoji on the Abuja-Lokoja Expressway. The journey is tasking due to the unpaved, bumpy road, dotted on one side with electric polls not linked by cables, indicating abandonment due to either insufficient funds or misappropriation.

On one edge of the village is the building the village calls a clinic. The word “clinic” oversells the decrepit building; it is a pathetic excuse for a healthcare centre. For a village with about 500 people, the clinic has a single bed, no equipment of any kind, nor water or electricity.

“They have rejected us like we are not in the FCT,” lamented a community health extension worker attached to the clinic by Kwali Area Council.

According to him, the facility has two staff but only he appeared for work on this day. From the facility, he pointed at an uncompleted building, conceived to be an upgraded primary healthcare centre.

“See the one they abandoned,” he said. “They came and ‘stole’ the money.” The building has been abandoned for upward of five years, according to the villagers; and in development term, it is a case of what happens when funds meant for the public good are freed up for private enrichment.

Gomani is one of the long-abandoned communities that make Nigeria’s national capital Abuja a dualism.

A dualism, in geography and development, refers to the existence of two separate economic and social sectors within a space. A dual society typically has rural, impoverished, and neglected parts surrounding a more developed and advanced part – but the two only have little interaction.

As PREMIUM TIMES’ investigation showed, Abuja is a dual society where officials take refuge in their fortified houses and offices with standard infrastructure and services at the centre, leaving hundreds of thousands of others to wallow in extremely torrid circumstances in the rural peripheries.

Except as maids and security guards, the rich may never see the poor from the neglected areas.

The abandoned communities are mostly homes to the indigenous people who originally had settled in Abuja before it became Nigeria’s national capital decades ago.

Danladi Jeji, the president of the Original Inhabitants Development Association of Abuja, (OIDA), told PREMIUM TIMES in an interview that the original inhabitants have become orphans in Nigeria’s equation.

As the constitution provides, Mr Jeji noted, the president and the National Assembly hold the executive and legislative responsibilities over the people of the FCT respectively.

“But for the 43 years of FCT, the government has been unfair to the original people,” he said. “And this is a democracy. They don’t remember us. There is a community, Jigba in Kuje Area Council, there is only one teacher for the whole primary school there.”

For water, the Gomani clinic and the entire community depend on Gurara River, about a kilometre away.

Except for men who can go to the river to bathe, the water needs of the community, including the clinic, is mostly borne by women who cover the distance to fetch water for their households or are paid just N10 per bucket by other users, like the clinic.

“Gurara is the source of water we have here,” said the health worker, pointing to a bucket in the clinic. “If at all I need water, I’ll pay and they will fetch it for me. Some women do that.”

The problem of water at Gomani dates back to the collapse of a borehole system five years ago. “When they brought it (borehole) we were using it,” said Peter Mathew. “It ran for about three months before it stopped.”

However, the village has a handpump, which supplies drinking water to the households twice a day.

“The pump is always locked except in the morning and evening when all of us queue to get water,” said Mr Mathew, who said politicians only remember them ahead of elections. “We only use the water from the pump for drinking; for other purposes, we get water from Gurara.”

Worse yet, there are other communities more deeply sunk beneath basic essentials for a community than Gomani. Sabo Tunga and Dogo Ruwa have no health facility, electricity or water supply system except, of course, dependence on Gurara River.

Basic school-aged children, scruffy in appearance, were either scampering after one another or joining in farm work and domestic chores during school hours when PREMIUM TIMES visited. These are parts of Nigeria’s notorious statistics of out-of-school children.

The knowledge of the underdevelopment crisis plaguing the Kwali communities is not lost on the area council. The rural development director for the council, Suleiman Idris, said a World Bank-assisted programme, which began in 2013, was to help facilitate development for the communities.

“However, some communities refused to participate,” he said, explaining that the programme was to be led by the communities themselves. He said Gomani indicated interest in the programme but has not been reached yet. Still, by design, Mr Idris said, not all the neglected communities would benefit from the World Bank programme.

“It means no hope for such communities,” one official said.

On any day, river banks on both sides barely slumber. After all, several villages depend on the river for their needs.

Asked if the river is considered safe for drinking, a member of the Dogo Ruga community, who depend entirely on Gurara for drinking and other uses, said: “We know it is dirty, but we have no choice. Drinking from it even causes cholera.”

Kutara lies across the river, among other communities in Abaji. For the villagers, the river is both a curse and a resource.

It is available as the source of water they use for all purposes and young persons make money paddling canoes across it daily. But it plays at the root of children’s inability to get an education and hinders trade in farm produce, a major means of survival for residents.

Kutara has a primary school, the only one available for all the villages in the area. But on most days, teachers do not appear for duty because they cannot cross the river by canoe, the villagers said.

One classroom has two desks and chairs. All the classes now have an inverted role – goats dwell in and children play, instead of learning, there. Goats’ droppings litter the ground.

“Nothing!” exclaimed a villager, Mohammed, when asked what learning takes place at the school. “Come and see,” he asked as he opened the door to one of the classes covered by droppings of goats.

Primarily, the Bassa people are farmers with guinea corn and melon as the main crops. But the market for the produce is the Kwali Market and they have to pay N500 to cross the river before getting to the market.

“We are not able to compete in the market because of cost,” said the octogenarian district head, Bature Dangana, speaking through an interpreter. “If we add the cost of transporting our goods across the river to get to the market, our prices will be higher than others’ at the market; so, we don’t sell well.”

At the peak of the wet season, the people are stuck in their villages as canoe operators would not work due to rising water level.

In such a case, any sick villager could die due to the difficulty of accessing healthcare facility in Kwali. The villages have no health facility and are only able to access care at the general hospital in Kwali. The so-called clinic in Gomani, which is closer to them, has no resource for service delivery – it is just an excuse for a clinic.

Children not able to get an education

“At times, our people die because of the problem accessing the clinic in Kwali,” said district head Mr Dangana.

“With the way government has not paid attention to healthcare (in these communities), people die unnecessarily and these are people who should be contributing to the economy,” Mr Adeduntan told PREMIUM TIMES.

Ahead of 2019 elections, the chairman of Abaji Area Council, Abdulrahman Ajiya, raised people’s hope of a chance at a safer, quicker journey across the river. Mr Ajiya brought a speed boat but without an engine. Since delivery and after the elections, the villagers said they had not seen Mr Ajiya again. The boat is just placed for no use at the backyard of the village head.

“No road, no water, no electricity, no hospital,” said Mr Dangana. “We are just in the FCT but we have no benefit. Politicians only come during campaigns for elections.”

A woman selling water fetched from Gurara… at N10 per bucket, she makes an average of N200 a day.

There is no form of human capital enhancement services the people have and every day, for most people, is a struggle for survival to reach the next day.

Selling water from the river, operating canoe, or working as commercial motorcyclists in faraway Kwali, young men and women just try to scrape together some money to merely survive.

Those who endure difficulties to sell their farm output and make some money face the risk of being kidnapped for ransom.

“Our people have been kidnapped,” said Mr Mohammed. “If they know you have some money after selling at the market, you may be kidnapped. We are in God’s hand, no government.”

Open defecation is what the villagers practice in all the communities visited by PREMIUM TIMES. Women bear the worst adverse effects of water and sanitation problems. Men can go to the river to bathe there but this is not so for women.

“Women get water and take it home to bathe but some men can bathe here (at the river)” said Mr Mohammed, a local politician who mobilises for Nigeria’s rulingAPC in the area. It is also women who are in the trade of selling water at N10 per bucket for the households that form the communities.

The official responsible for rural development in Abaji, Ali Baba, declined to comment when our reporter visited the secretariat for comment on this report.

Outside of the enclaves of the rich, like Maitama or Asokoro, Abuja has urban slums, such as Lugbe, Nyanya, Orozo, Karimo or Dei Dei. They are not all connected to public water service and are facing sanitation and planning crises. But this is just a hint of Abuja’s development crises.

The situation of the villages such as Gomani or Kutara is the reality of Nigeria’s underdevelopment and poverty in human and infrastructure terms: children, whose bodies and minds may never develop fully because they are malnourished and are not getting an education; no electricity, no water, no road, no hospital, no school, no security – thousands of citizens across the villages are just abandoned.

The official responsible for rural development at the FCDA, Felix Nwankwo, did not comment for this report despite repeated requests.

“These (abandoned communities) are the people who should be growing the country’s GDP,” said Mr Adeduntan of ActionAid Nigeria.

“So, if you don’t pay them attention and give the standards and dignity they deserve as human being, the country is suffering, the government is the greatest loser. The fact is that the quality of the people’s conditions is a measure of the quality of government.”

He added: “Another perspective to it is that you have population explosion. Imagine married adults, where there’s no recreational facility, no power supply; they will just be making love and keep making babies and we’ll keep having population explosion. Remember this also has attendant challenges because you have more children out of school. This has significant bearing on the city and has increased crime rate.”

“The surrounding communities have been criminally neglected. People are forced to move the centre where they think they get better life and you have shanties growing everywhere.”

Oyetola Has Changed Negative Narratives in Osun, Says CAN President

Tunisia: Why Tunisians Are Still Out On the Streets A Decade After the ‘Dignity Revolution’