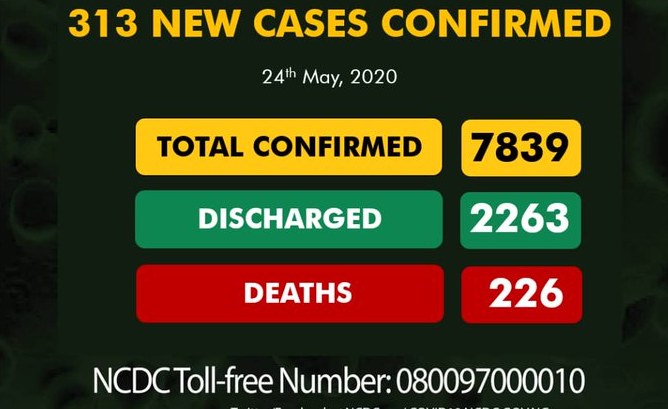 Nigeria’s tally of confirmed COVID-19 cases on Sunday rose to 7,839 as 313 new infections were announced by the Nigeria Centre for Disease Control (NCDC). Also, five deaths were recorded on Sunday bringing the total number of confirmed deaths from the virus to 226.

Lagos recorded the highest daily figure of cases reported with 148 infections. The state also remains the epicentre for the disease.

Nigeria has so far tested 44,458 persons since the beginning of the pandemic.

A breakdown of all the confirmed cases so far shows that out of the total confirmed cases, there are 5,350 active cases, 2,263 have recovered and have been discharged, and 226 deaths have been reported.

There has been an increase in the number of cases reported across the states despite Nigeria’s low figure of people tested for the virus.

So far, only two states, Kogi and Cross River, have not reported any case in the country.

The NCDC cautioned Nigerians that by disregarding the COVID-19 preventive measures, they can put themselves and others at risk.

It also reiterated that places authorised to be opened should operate under controlled access and adhere to preventive measures such as physical distancing, wearing of face masks amongst others.